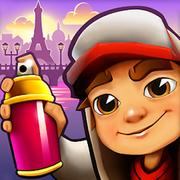 Subway Surfers Online is a free online addicting endless running arcade game created by Kiloo and Sybo. This game is powered by WebGL technology and it is the online version of the popular game Subway Surfers. You can play this online game in modern browsers on your computer. However, if you want it to run on your mobile devices, you need to download Subway Surfers Android APK on APKFab.com for free.

In Subway Surfers, you need to play the role of young graffiti artists, who are caught showing off their wonderful art creation inside the subway. Jump, slide, turn left and turn right to run through the subway tracks to escape from the subway guard and his dog. Be careful of the oncoming trains and obstacles. Leap over the low barriers and roll to dodge the tall ones. Use your fingers or mouse to switch between three lanes and jump on the top of the trains to ensure you don't crash into anything.

Don't forget to collect gold coins, power-ups, and other cool items along the way while avoiding being hit by the subway trains and other obstacles. There are two main types of power-ups: Single Use (Hoverboard, Mystery Box, Score Booster, and Headstart) and Upgrades (Jetpack, Super Sneakers, Coin Magnet, and 2x Multiplier). Collect these power-ups along the way or invest some coins in them to upgrade your gaming experience.

There are 15 game characters on this pc version of Subway Surfers. Jake and Tricky are the main characters, you can customize your characters before you start the game. As you collect more coins you can unlock new and exciting characters to surf through the subway with. Are you ready to run? Click to play Subway Surfers online for free now! If you enjoy this game, try out other fun running games such as Tomb Runner and Relic Runway. Have a good time!

1. Running and dodge fun on the subway!

2. Many customizable game characters to choose from: Jake, Tricky, Yutani, Fresh, and many other friends!

4. Awesome power-ups and items for you to try and upgrade.

If you want a better gaming experience, you can play the game in Full-Screen mode. The game can be played free online in your browsers, no download required! Did you enjoy playing this game? then check out our Avoid games, Endless Runner games, Collecting games, Jumping games, Running games,

audioPro™ Player $̶3̶.̶9̶9̶
8.9 243
Screenshots
Videos
The Games You May Like