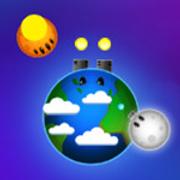 Earth Attack is an online game that you can play in modern browsers for free. Earth Attack Online is in the category of Skill. This game has received 5092 plays and 70% of game players have upvoted this game. Earth Attack is made with html5 technology, and it's available on PC and Mobile web. You can play the game free online on your Computer, Android devices, and also on your iPhone and iPad.

The earth is being attacked! Many evil planets invaded the solar system and want to destroy the Earth. There are several planets evil, explosives, glass and giant! But the Earth will attack! And the Earth will not be alone, the moon will be together in this battle. There are many weapons, evolve, increase its speed and survive to Destroy all planets! And get touched with a final amazing! Earth Attack is a great game with 10 levels, many enemies, effects, sounds and animations. It is a game with the evolution of weapons, life and speed.

If you want a better gaming experience, you can play the game in Full-Screen mode. The game can be played free online in your browsers, no download required! Did you enjoy playing this game? then check out our Skill games, Shooting games, Kids games, Highscore games, Boys games,