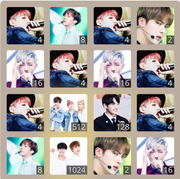 BTS 2048 is an online game that you can play in modern browsers for free. BTS 2048 Online is in the category of Boys. This game has received 12791 plays and 32% of game players have upvoted this game. BTS 2048 is made with html5 technology, and it's available on PC and Mobile web. You can play the game free online on your Computer, Android devices, and also on your iPhone and iPad.

They released their debut single album, 2 Cool 4 Skool on June 12, 2013. They have released six extended plays until now. Map of the Soul: Persona is their sixth studio album, which became the best-selling album in the history of Korean music. They almost sold over fifteen million copies of albums to become the best-selling band of all time in Korea.

Time magazine featured them as Next Generation Leaders and listed them as one of the top 25 most influential people on the internet. They received many awards including four Billboard Music Awards. They have staged many international tours and earned a reputation for their live performances.

If you want a better gaming experience, you can play the game in Full-Screen mode. The game can be played free online in your browsers, no download required! Did you enjoy playing this game? then check out our 2048 games, Boys games, Girls games, BTS games.

2048 BTS style
Screenshots
Videos
The Games You May Like